NOTICE: DO TO THE IMPACT OF THE COVID 19 VIRUS, WE WILL BE OFFERING ONLINE ZOOM MEETINGS; WHEN POSSIBLE, AN IN PERSON MEETING PLACE WILL BE ANNOUNCED IN THE NEWSLETTER ALONG WITH THE ZOOM LINK. 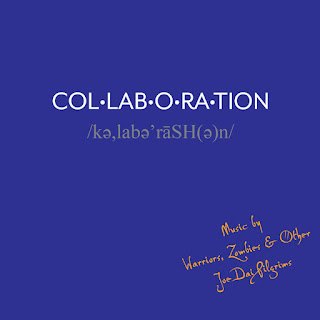 If you haven't heard of the new double album, Collaboration that Joe Peters, long time SAMI member, has released, you need to give a listen to the incredible songs by Joe and his huge collaborative effort with friends. Back in November, this newsletter featured songs from the first disc of the double album, (affectionately dubbed ‘Thing 1.’ This month showcases the 2nd disc, ‘Thing 2’ in which all lyrics were penned by author, Frederick Michaels, also known as SAMI member, Michael Rothman.  The entire double album of 27 songs can be freely streamed (or purchased for download) on Bandcamp by clicking on this link:  Collaboration by Warriors, Zombies & Other Joe Dai Pilgrims

Here is what Joe had to say about the project:

"Here’s how it’s gone down for the most part: friends sent me lyrics, poems, photos, ideas, and I put em to music. I then made two-track demos (guitar and vocals), and sent these to my main collaborator back in Indiana, the wizard Michel Kelsey (http://www.michaelkelsey.com), who worked up arrangements, a process we call Kelsification. These Kelsified tracks were then mostly sent, without my vocals, to the brand new REC Room Recording studio (https://www.recroomrecording.com/)in Lafayette, Indiana, where a procession of singer friends of mine recorded new vocals for the tracks. These vocal tracks were then sent back to Kelsey to be loaded into the existing mixes, along with any additional/new instrumentation deemed appropriate…"

Frederick Michaels writes this about the 2nd disc that he subtitled, “Candles In The Darkness":

"Candles In The Darkness is a collection of songs mostly about the triumph of love and hope over heartbreak and despair, but also about the whole being greater than the sum of parts. In this time of fear and isolation, brought upon us by a pandemic, people separated by as much as half a continent have combined talents in incredible collaborations that lift the spirit and touch the heart. Lyrics are by Frederick Michaels, music by Joe Peters, arrangements and instrumentals by Michael Kelsey and vocals and additional instruments by a marvelous group of individual artists. Enjoy!"

Thing 2 – Candles in the Darkness (words by Frederick Michaels)

Be sure to take a minute and check out this newly released collaboration. Again, all songs can be streamed freely or downloaded at:  Collaboration by Warriors, Zombies & Other Joe Dai Pilgrims