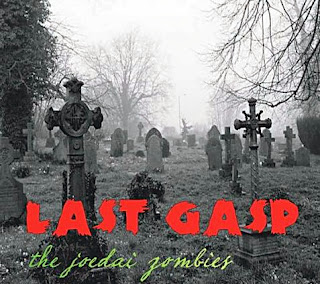 Proceeds to Benefit the Shirley Martin Scholarship for Young Songwriters!!

Mosey Down Main Street with SAMI 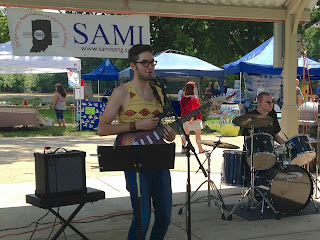 Come out to the 6th and Main Street Stage on Saturday August 10th for the 2nd Mosey for the Arts in downtown Lafayette.

To see the Lafayette Journal and Courier's TGIF article about it, plus additional info on this Mosey,  click here!

SAMI to Provide Live Music at the Wabash RiverFest 2013 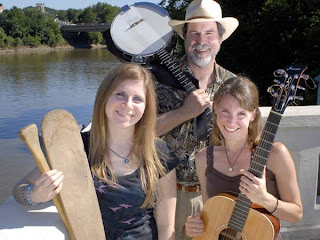 RiverFest Has Something For Everyone!

RiverFest was created with kids and families in mind, all for FREE!

SAMI will provide live music all throughout the day with the following schedule of performers:

Come out and celebrate on the banks of our Wabash River!

Born and raised in southern with a heart for the North Woods, Greg is a solo acoustic artist currently residing in . Greg also plays guitar and mandolin and sings in the Acoustic Americana duo, The Rust Buckets, with John Lacy. Greg has always loved singer songwriters with a knack for incredible story telling, and until recently was content to play other people’s music.


If you enjoy laid back, lemonade sippin, style songwriting, with heartfelt lyrics of love lost and found, struggles with the day to day, but hope for tomorrow; then give Greg a listen. Producing a big sound armed with only a single guitar and his voice, Greg’s songs leave you thinking well after the last note is sung. Personally connecting with the audience is important to Greg, and his wit and heartfelt lyrics will have you feeling as though he is performing in your own living room or backyard.


Greg has performed at the Regional Artists Showcase at the 2011 Indiana Fiddler’s Gathering, 2011 Wabash Riverfest, Lafayette Live, Vienna Espresso Bar, regularly at , as well as living rooms and backyards throughout and .

Mike Byers work with glass, metal and wood for the most part. Some would call this being an artist, but Mike says he really just makes stuff. Mike plays traditional Celtic music with a band called, oddly enough, Bailiff's Hollow and reads for the fun of it, but considering what he does to make a living, just about everything is "for the fun of it" as far as he’s concerned. Mike’s been a pilot, a covert operations type and even had a more-or-less honest job with an engineering company for about ten years. All in all, making stuff is a whole lot more fun, says Mike. Mike performs on guitar and vocals, and will be joined by Chuck Wittemore (bodhran, whistle, Irish flute).


Amanda Fletcher is a 20 year old singer/songwriter and a member of the Songwriters Association of Mid-north Indiana. At 14 she began performing her original songs and gaining recognition in the area. By age 15 Amanda was the youngest person ever to win the Shirley Martin Scholarship for Young Songwriters. In 2008 she recorded at Hoosier Surf Records and in September released her CD entitled Breaking Free.

Amanda enjoys writing songs, singing, playing the piano and collaborating with other musicians both local and national. Her music has been featured on Fm 106.3, FM 103.9, & on Am 920. Amanda performs at various venues in and about town and made her Taste of Tippecanoe debut in 2009 on the Songwriter’s Stage.

Joe Peters is a singer-songwriter who has released eight CDs of original music since 1998, and can often be found performing around Indiana and elsewhere in theMidwest. Joe came of age during the late 60s and early 70s, and his songs hearken back to a time when young people sought the experience of peace, love and adventure and expressed this search in their music. Through his own music, Joe hopes to rekindle in others that spark of the truth seeker that was awakened in him long ago by the songs of other introspective songwriters. Many of Joe’s songs are influenced by oriental philosophies and were written while living and working overseas. Moreover, as a former professor of environmental science and natural resources management, Joe’s music often embraces environmental themes, including land stewardship, a sense of place and community and the love of nature.

Joe and his music have been frequently featured on the Local Music Show and Acoustic Blend, WBAA (AM 920), Voice of the Independent Artist, now The Local Thunder (Fm 106.3 & 103.9), and Rock-It Local (FM 95.7). Joe opened for country superstar, Lorrie Morgan at the Lafayette Theater, and Joe played the Taste of Tippecanoe songwriter stage in 2009, with Deep & Simple in 2010; the Horizon Stage in 2012 and the Marquis Stage this June 15. Joe’s tunes have been the soundtrack to a number of Hoosier Artisan Rena Brouwer’s paintings over the years. The duo has performed live in galleries & other venues in front of audiences around Indiana, including the LillyNature Center. Peters plays while Brouwer paints.

Joe’s song, Sail Away, won top honors at the First Annual Blooming-Tunes songwriting contest in 2009. His original musical slide show, Root of the Matter, is featured on the Catholic Relief Services website.

There's something stirring in the heart of Barrett Myers, and chances are that he's written a song about it. Barrett loves a catchy melody, but something within yearns for depth and meaning; all of this shines through in soulful performances of his Folksy compositions on acoustic guitar. He's got more than a handful of heartfelt ballads about life, love and the journey, written on the road and at home in . These are complemented by upbeat and clever tunes that celebrate the wondrous goodness of thermal underwear and the 95 cent Burger King soft-serve ice cream cone.

Born in and with roots in , Barrett has been writing and performing music since a fateful road trip one spring day in 2008. Lately he's been seen entertaining the crowds at various coffee shops and open mic nights around the area.

To hear more, see upcoming shows, or book Barrett for a private event, send an email to heybarrett@gmail.com or check out http://www.barrettmyers.com


Singer, songwriter, great performer, Michael has it all. His range of music is impressive, ballads from the past like the material on Lovers, Heroes & Rogues, Kipling set to music on Norman & Saxon, Mercedes Lackey inspired songs on Owlflight, and a whole collection of funny songs that defy description. Truck driving vampires, Cajun spacemen, and very motivated dogs all have been song topics for Michael’s fertile imagination.

Click on the songs to go to SoundCloud link!

Hunter Taylor, You Are His

Join us in celebrating the 13th annual Shirley Martin Scholarship for Young Songwriters Awards night on Tuesday May 14th at 7:00 pm at the Tippecanoe Arts Federation (638 North Street, Lafayette, IN.) There will be live performances from our winners and refreshments served. The public is invited to attend.

Applications Are Now Being Accepted!


“A scholarship for the advancement of young songwriters”

What- Currently accepting applications for the 2013 Shirley Martin Scholarship for Young Songwriters, which includes the special Mike Lane Horizon Award. This scholarship and award exists for the purpose of developing, recognizing and supporting area youth in the advancement of their songwriting skills.

When- Applications being accepted until April 5, 2013.

Winner Will Receive:
1. $500 cash award to be applied toward the Shirley Martin Scholarship winner’s education, a musical instrument or other songwriting-supporting endeavor.  Other cash awards for runners-up and the Mike Lane Horizon Award.
2. Performance opportunities.
3. Local publicity.

How and Where to Apply:
Applications and instructions can be downloaded (click here) or write to:
The Tippecanoe Arts Federation
638 North Street
Lafayette, IN,  47901

Distribution: Winners will be notified on or before May 6, 2013.

For additional information email Barrett Myers at heybarrett@gmail.com
Posted by Barrett at 8:50 AM 0 comments 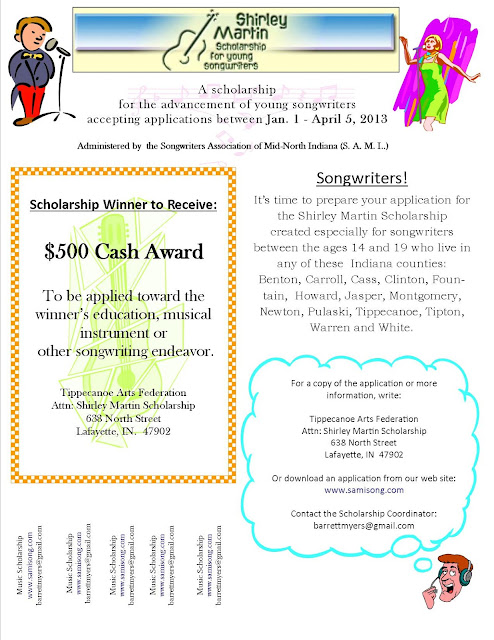