SAMI would like to invite you to the Dec 20th meeting and annual holiday party at the TAF Fiddler’s Room.  Bring a snack or beverage to share and a ($5 or less) wrapped “White Elephant” gift if you would like to participate in the exchange.  The fun will begin at 7:30 pm with songs to share and stories to tell. We hope to see you there!!
Posted by Cheryl Fletcher at 8:16 AM 0 comments

"It's hard to imagine another artist on the folk scene who combines the same concise, deceptively understated, lyrical insight and sometimes devastating wit with such world-class instrumental prowess"

SAMI is proud to present nationally known folksinger, Joel Mabus, in concert on Tuesday, November 15, 2011 from 7-8pm. The concert will be held in the Fiddler’s Room (lower level) of the Tippecanoe Arts Federation, 638 North Street, Lafayette, IN and tickets are $10 per person (children 12 and under free), available at the door. After the concert Joel will offer a songwriting workshop from 8:30-10pm; cost of the workshop is $15 per person, or $20 for both the concert and the workshop (free to SAMI members who have paid 2011 dues).
Singer, songwriter and instrumentalist Joel Mabus is a maverick in the folk music world. He defies any easy pigeonhole. By turns, he picks a mountain banjo to accompany an ancient ballad, sings a witty song about modern life, plays a sweet Irish melody on guitar, swings a hot jazz number, and then reaches deep for a soulful expression of values in a troubled world. He tops it all with a fiddle tune or old Carter family song -- all skillfully blended into a seamless flow. One fan said “Its music from the heart that hits you right between the eyes.”

A mainstay on the folk circuit these past 30 years, Joel has 18 albums to his credit; the latest are Retold (2008) - new recordings of his early hits and The Joel Mabus Omnibus (2008) - a reissue of two early albums. He has performed in concert with such folk music stars as John Prine, Joan Baez and Tom Paxton, and has been featured at the top folk clubs and festivals, such as the Philadelphia Folk Festival and Vancouver Folk Festival.
Concert with Joel Mabus

N.B. Both the concert & workshop are free for SAMI members who have paid their 2011 dues.
Bio
Joel Mabus may be called a singer-songwriter, but he doesn't sound like one. He's the son of a 1930's old time fiddle champ and a banjo-pickin' farm girl. His performing career began in college during the Vietnam era, where he studied anthropology and literature by day and played coffeehouses by night. One critic writes, "Joel Mabus knows his way around the English language and American culture just as well as he knows his way around a fretboard.” Born in 1953 in the southern Illinois town of Belleville, Joel has recorded 20 solo albums of original and traditional music since his recording career started in 1978. For three years running, Mabus has been in the top 10 most played artists in the Folk Radio Charts for North America (folkradio.org) [The only other top 10 artists who share that 3-year distinction are Pete Seeger and Bob Dylan.] Joel's latest CD is 2011's American Anonymous, an album of traditional American folk songs. which has been garnering high praise from the critics. A one-off in the folk world, Mabus defies any easy pigeon-hole. His palette ranges from mountain banjo to jazz guitar -- from sensitive introspection to wicked satire. He's both picker & poet, and from coast to coast over the past 40 years this Midwesterner has brought audiences to their feet, wanting more.
Posted by Mike Atwell at 9:03 PM 0 comments

With songs about soldiers, pirates, Vikings, motorcycles, and guys ogling women, it’s been said that Michael Longcor’s newest album Walking the Wilderness is “Manly Folk.”
“There’s no denying it.   I’m a guy, and I tend to write from that point of view,” he says.  “I try to write songs that tell stories, and usually those stories are told by the little guys in the trenches, the ones who live and fight and make history one painful footstep at a time.  And when I say guys, it’s mostly men, but my songs are also about strong women.  And some of the songs are just for fun.”
The new album’s songs deal with everything from love (“That’s Why This Is Not a Love Song”),  riding big motorcycles (“V-Twin Boogie”) the Columbia Shuttle disaster (“Shooting Star”), to kids who want to be threatening minions when they get older (“Flying Monkey”).  There’s even one about  trying to get respect while playing the banjo.   He also covers a creepy-yet-funny lullaby (Daniel Glasser’s “Close Your Eyes”).
“I decided early on that this should be a local, Greater-Lafayette area project, and showcase some of this area’s remarkable talent.”  He enlisted the help of Echo Box’s Bartek Michael on lead guitar, classical violinist Allison Edberg, and bassist Lynn Colwell, a well-known performer in the local jazz scene,  supplying  the low end.  Paul Radecki, a regular with Dance Troupe Oasis and Ishtar, handled percussion.  The CD was recorded before a live studio audience and mixed and mastered at Jeff Anderson’s Sound Logic Studio, located just south of Lafayette.
Longcor has 13 other albums to his credit, primarily through small regional publishers such as Dodeka, located in the Chicago area and Firebird Arts and Music, based in Portland, Oregon.    His songs have won regional songwriting awards and have been featured on local NPR affiliate WBAA, and NPR’s nationally syndicated Folk Song Festival.   Some of Longcor’s quirkier music has appeared on the syndicated radio show, “Doctor Demento,”  and he has appeared onstage in live shows with the Good Doctor himself.  This CD marks Longcor’s first foray into producing.
“It’s the difference between being an architect and being the general contractor who’s building a house.  You’re suddenly responsible for getting everything to come together and look good, or in this case sound good.  Working with producers and engineers on previous CDs did give me an advantage in getting this one together.  I’m pleased with how this project turned out, and I think the people who helped contribute to the quality of the instrumental music and the recording have a big share in that.”
The Songwriters Association of Mid-north Indiana (SAMI) will hold a release party starting at 7PM Friday, August 19 in the Fiddler’s East Meeting Room at Tippecanoe Arts Federation, 638 North Street, Lafayette.  The event is free and open to the public.
Posted by Mike Atwell at 4:29 PM 0 comments 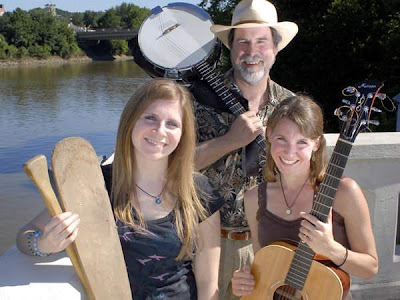 Members of the Songwriters Association of Mid-north Indiana (SAMI) will perform on Saturday, July 9, in the Tapawingo band shelter from 9am to 4pm for the 2011 Riverfest celebration at Tapawingo Park, West Lafayette. The family-friendly event features a 5k foot race and voyageur canoe races all day long. The event is free and open to the public; however, donations to SAMI for its 2012 Shirley Martin Scholarship for Young Songwriters are appreciated. For more info: http://wabashriverfest.com/

Posted by Cheryl Fletcher at 8:27 AM 0 comments

SAMI has selected the winners for the 11th annual Shirley Martin Scholarship for Young Songwriters this past week and wants to congratulate the winners. This year’s judges saw a record number of applications and stellar quality songs. The judging was both close and difficult with the winners all within a few points of each other. (Note the ties for both the Second Runner-up and the Horizon awards.)

The first place scholarship winner receives a $500.00 cash prize. There are additional perks for our top promising songwriters including cash awards, constructive feedback on their songs and opportunities to perform. The winners will be playing their songs and accepting their awards on Tuesday May 10th, 7:00 pm at the TAF building, 638 North Street in downtown Lafayette. The event is free and SAMI would like to invite everyone to come and help us celebrate these amazing songwriters!

Stay Tuned for the Results from the Judging Committee!

The deadline has passed for submitting applications to the 2011 Shirley Martin Scholarship for Young Songwriters. Stay tuned for the announcement of the winners! Results due to be posted on or about May 1st.
Posted by Cheryl Fletcher at 6:32 PM 0 comments

“A scholarship for the advancement of young songwriters”

What- Currently accepting applications for the 2011 Shirley Martin Scholarship for Young Songwriters, which includes the special Mike Lane Horizon Award. This scholarship and award exists for the purpose of developing, recognizing and supporting area youth in the advancement of their songwriting skills.

When- Applications being accepted until April 8, 2011.

1. $500 cash award to be applied toward the Shirley Martin Scholarship winner’s education, a musical instrument or other songwriting-supporting endeavor. Other cash awards for runners-up and the Mike Lane Horizon Award.

How and Where to Apply:

Applications and instructions can be downloaded here or write to:

Distribution: Winners will be notified on or before May 2, 2011.

SAMI hosted a concert and workshop with the multi-talented Tim Grimm on January 18th at the TAF building. Starting at 7:00 pm, Tim performed a totally unplugged acoustic set featuring many of his original songs from his latest release, "Farm Songs" (2010). Following the concert, many stayed for the songwriting workshop led by Tim. Speaking as one who attended both the concert and workshop, SAMI did well by bringing this caliber of a singer/songwriter/performer to Lafayette. For anyone who might have missed this concert, check out Tim's website for more information on his music and tour information. Check back periodically to samisong.com for news concerning future workshops and concerts brought to you by SAMI.
Posted by Cheryl Fletcher at 2:54 PM 0 comments